FIREscape is an intelligent, addressable, 40V based emergency lighting system utilising LED technology designed by Hochiki. It uses a very low energy source which significantly reduces energy consumption and CO2e production. Add to this an automatic testing capability which simplifies maintenance, and the result is a significant reduction in its cost of ownership compared to traditional systems.

Its unique “plug-in” design makes the initial installation and servicing a quick and simple task, which in most cases can be accomplished without the need of access equipment.

This modular system is flexible and can be expanded to protect large buildings, multi building sites and multi-site applications.

Hochiki is distinguished by the experience and expertise of almost 100 years as one of the world's largest manufacturers and suppliers of fire detection products.

The BCA required that emergency lighting and exit sign systems are to comply with AS2293, FIREscape complies with all parts and clauses of AS 2293, it has also been independently assessed by CSIRO.

FIREscape luminaires use LEDs in order to generate the necessary illumination whilst using as low a current as possible. Even at its highest, the LED current usage is only 80% of the recommended currents of LED manufacturers. In this way, the light power consumption has been kept to a minimum and the overall life of the LED has been extended.

The graph below shows a total cost of ownership comparison based on 1000 luminaires, 80% non-maintained 20% maintained, emergency lighting system for manual-test, self-test and Hochiki’s FIREscape system, over a 10-year period.

A GREENER SOLUTION TO EMERGENCY LIGHTING

The FIREscape system is based on LED (Light Emitting Diode) solutions that consider the useful life of the entire emergency light system, from its installation to the recycling of the equipment at the end of the life-cycle.

The FIREscape emergency light system uses fully recyclable materials that do not place an unnecessary burden on the environment. Due to their unique extra low-voltage solution, cabling costs are reduced by 60% during installation when compared to old central battery-based systems.

Due to their self-contained backup power source, the FIREscape lighting devices can use screened, non-fire rated cabling, instead of heavy and costly fire-resistant cabling, reducing the installation costs associated with traditional emergency lighting systems.

The environmentally friendly values in the FIREscape emergency lighting system are specifically evident in the energy costs and CO2e emissions, which are associated with using and maintaining the system.

The FIREscape emergency light system has also been designed, bearing operational safety and user-friendliness in mind. An internal control system has been included within the system. It constantly controls the condition of the lights’ LEDs and batteries. If necessary, the system will provide specific information on the status, either locally on a keypad or by representing it graphically at the control centre of the service provider using an IP or GSM network.

By using the optional PC-based graphical software, the luminaire status information can be linked with floor plans showing the alarm locations. 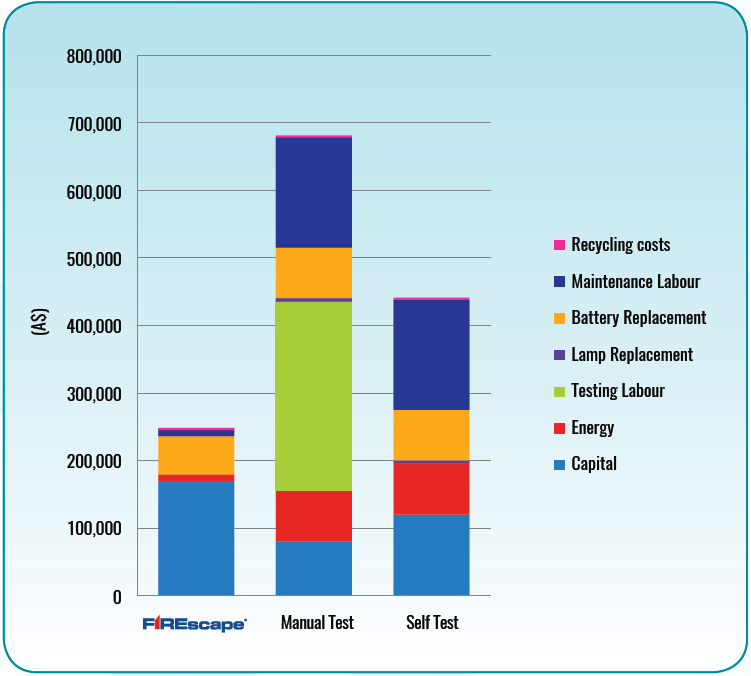